Version 6 comes also with some performance enhancements making the whole user experience that much faster. New displays specifically for mobile users are also catered for.

One area that I do congratulate them on is a new display specifically for overhead projectors. As a certified ScrumMaster I have been in countless story pointing sessions where issues are displayed in over head projectors. I have a little hand held projector that is just great for this sort of thing, but the pixels are not wonderful for a full display. This new screen display allows users to see clearly on even that small projector - although I have yet to see this display, so until I do a more complete review, I'm only quoting their sales points at this stage. 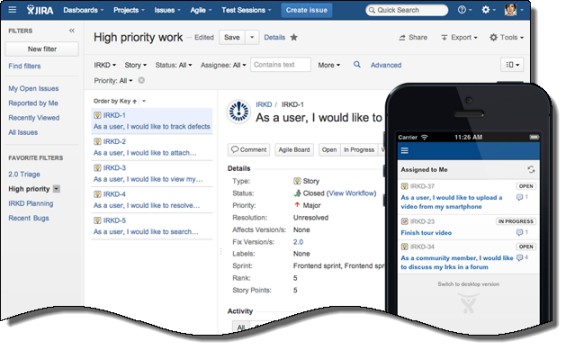 There is even a new team display for issue detail and discussion called detail view. This shows more information on a single page allowing teams to work with a list of issues in a more efficient way. On the left side you have a list of issues and on the right side of the same screen you have the actual detail of each issue. The whole team can read the details of the issues without having to jump back in forth between list view and detail view.

The new version of the browser-based software also includes an interface specifically designed for mobile clients, providing many of the most popular capabilities found in the full version. Users can now assign, prioritize and comment on issues from any smartphone, and even bring in additional participants.

There is a recognition from Atlassian that Jira is increasingly being used for projects other than software development so it will be an interesting watch over the next few releases on how that recognition will come through the product itself.