Leadership of the Technical Team #3

Number 3 in the series on Technical Leadership.

Makes Decisions for the Team 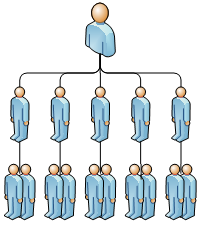 I was surprised to find that this section was more difficult to write for several reasons. the title “makes decisions for the team” is something that I could have well reconsidered as it seems both obvious and at the same time very snobbish and places the leader in a position that should not be taken – at the top.

Most people automatically place the leader at the top of the team in a visual organisational chart. While the organisational chart does indeed show this position at the top, it is not the visual reference that I want to portray. I’d suggest that the leader is the one underneath; leading from behind or holding the team up; in a supporting role; carrying all the responsibilities of the team; a servant to the team; and the person protecting the team from the politics and pressures that attempt to divert the team from its path of productivity and enjoyment. 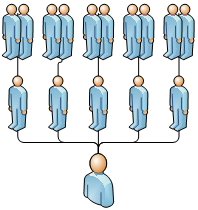 One of the ways a leader can serve and support his/her team, is in making decisions for the team as a whole.

In the position of leader and manager, you are expected to move the focus from the code being produced to the product. You are also expected to know and understand the perspective of several other areas including those of the boss, the company, the customer, the financial budget, and those of other departments within the company.

It has been said that there are two different types of leaders - we’ll ignore the fact that there are several, just for this instance, let’s assume there are two. Take, for example two good managers of forestry teams tasked with clearing a section of forest and harvesting its timber.

Leader One will take his team into the forest, start them cutting trees in the most effective pattern that his experience shows for its productivity; he’ll have the trucks lined up to take away the timber in the correct times in the correct order; have the forklifts correctly placed to load the trucks; and have everything running like clockwork so that he/she clears the most timber of any forestry team. That is an excellent team and a good leader.

However, Leader Two will go into that same section of forest but before work begins, this leader will climb a tree, have a look around and come down to declare to his team that they are in the wrong forest and they should be over the other side of the hill.

Leader One was acting in the best interest of the project looking at the tasks required and delivering to the tasks. Leader Two however realised that his position was to serve the team by having the ability to view the larger picture, ensuring that the team not only delivered to the project, but delivered to the RIGHT project in the CORRECT direction to also serve the company.

This ability to raise your head above the tasks at hand to see the overall picture is usually very difficult for those whose lives to this point revolved around climbing inside the disk drive door, only coming out to eat or sleep.

The leader is in a position to make everyday decisions for the team. With the knowledge and understanding of the forces that effect the team, the leader can guide the team into exceptional productivity and communicate that to those others in the company who need to know. Communication is a strong point and I direct you to a previous post titled “Even Programmers need to Communicate”.

Remember, you can always change or deal with a bad decision but you can do nothing when no decision is made. Yes, be prepared and able to hold your head up high while you do a total 180 on a decision as more information becomes apparent.

I have never understood the old saying of "make a decision and stick to it". That is unwise advice and will have you standing in the wheelhouse of a sinking ship with total resolve as you draw your last breath in the knowledge that you stuck to your decision to ram the iceberg even after it became apparent that it was larger than your ship.

A good leader will not only make decisions, he will also allow the team to make decisions where appropriate. Grow your team by allowing them to make decisions where they are able. Ensure that they have as much information as possible to allow that decision without attempting to tell the team which decision they should make (although there are times when that might be required). However, be also prepared to stand behind the decision that is made and make it clear to the team if it becomes apparent that they should make a change to that decision.

Rely on your gut feelings, they will NEVER fail you. Just make sure it is your gut you are feeling and not your heart - that can fail you.